Wind power, also has the names of wind turbine, wind generator, wind generators and windmills. Wind power is used to power small farms, houses and cottages. Wind power can provide electricity to individual consumers for the use of lighting, appliances, a TV and much more.

Wind power – a few wind turbines assembled in one or more locations. Large wind farms can contain 100 or more turbines. Wind power plants built in areas with high average wind speeds – from 4,5 m/s and above. Previously there must be special research of the potential areas. Anemometers installed at a height of 30 to 100 meters, and within one to two years gathering information about wind speed and direction. The information obtained can be combined to map the availability of wind energy. These maps (and a special software) allow potential investors to evaluate the rate of return on the project. Wind speed increases with height. Therefore, wind farms are built on top of hills or uplands, and generator mounted on tall towers of 30-60 meters. Take into account things that can affect the wind: trees, large buildings, etc.

During the construction of wind power is taken into account the influence of wind turbines on the environment. Laws adopted in the UK, Germany, the Netherlands and Denmark, restrict the noise level of running wind power plant of up to 45 dB in daytime and 35 dB at night. Minimum distance from installation to homes – 300 m.

The history of windmills (a name given to wind power, wind power generators) began in the last century. Already in 1995, using of wind turbines worked out four and a half thousand megawatts of electricity. The cost of wind turbines at this time decreased significantly, and consequently the cost per kilowatt has become smaller. For statistics: in 1988, cost of a kilowatt-hour of electricity was 40 cents, today it is approximately equal to 5 cents. So, this cost is approaching to the cost of electricity generated by traditional sources of energy (oil, coal, gas).

The use of wind power (wind turbines) has several advantages compared to other power plants:

– Development and installation of wind turbines are very expensive procedure, but you need to consider such an advantage as the use of free wind energy
– When compared to nuclear power, then, using wind power is no problem of storage and processing of nuclear waste
– The use of wind turbines, is a very environmentally friendly way to generate electricity. 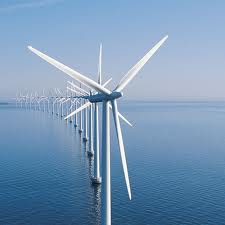 The only drawback in the use of wind power is the lack of wind, not all regions have the opportunity to put wind turbines, because of the low frivolity in those areas where there is enough wind may not be required to install wind turbines due to its distance from residential houses, villages and other sites .