Solar energy – the direction of alternative energy, based on the direct use of sunlight to generate energy in any form. Solar power uses a renewable source of energy and is environmentally friendly, that is not generating hazardous waste. Energy production using solar power is well agreed with the concept of distributed energy production. Methods for producing electricity and heat from solar radiation:

– Getting electricity through photovoltaic cells.

– Solar thermal energy – heating the surface, absorbing the sun’s rays, and the subsequent distribution and use of heat (focusing sunlight on a vessel with water for subsequent use in heating, hot water or steam electrical generators).
– Convection power (converting solar energy into the flow of air directed at the turbine generator).
– Solar balloon power (generation of steam inside the balloon by heating the surface by solar radiation, coated with a selectively absorbing coating). Advantage – a pair of stock in the tank is sufficient for power at night and in inclement weather.

– Accessibility and inexhaustible source.
– In theory, the complete security to the environment, although it is likely that the widespread introduction of solar energy can change the albedo of the earth’s surface and lead to climate change (but at the present level of energy consumption is extremely unlikely).

– depending on weather and time of day.
– As a consequence, the need for energy accumulation.
– The high cost structure.
– The need for constant cleaning of the reflecting surface from dust.
– Heating the atmosphere above the power station.

– Due to theoretical limitations in converting the spectrum into usable energy (30%) for photocells of the first and second generation requires the use of large areas of land for power plants. For example, for 1 GW power plant it may be a few tens of square kilometers (for comparison – hydropower, with the same capacity, prints from the use of much larger tracts of land), but the construction of solar power plants of such capacity may lead to changes in the microclimate in the locality, so basically installed photovoltaic power station 1 – 2 MW close to consumers or even individual and mobile units. Photovoltaic cells on the large solar power plants installed at a height of 1,8-2,5 m, which allows the use of land for power plants for agricultural purposes, such as for grazing. The problem of finding large areas of land for solar power is solved in the case of the solar balloon stations, suitable for both terrestrial and maritime and for high-rise home.

– The flow of solar energy falling on a set at the optimum angle of cell, depending on latitude, season and climate and may vary twice for the settlement of the land (up to three in view of the Sahara Desert). Atmospheric phenomena (clouds, fog, dust, etc.) not only alter the range and intensity of the incident on the surface of the Earth’s solar radiation, but also alter the ratio between direct and scattered radiation, which exerts considerable influence on some types of solar power plants, such as hubs or on the elements of a wide range of conversion.

– Photovoltaic converters work day and work less efficiently in the morning and evening twilight. The peak power consumption falls on the evening. In addition, the produced electricity can fluctuate sharply and unexpectedly due to changing weather. To overcome these shortcomings by using solar power efficient electric batteries (today it is not enough to solve the problem), or converted into other energy forms, such as building a pumped storage stations, which occupy large areas, or the concept of hydrogen energy, which today still not cost effective. Today, this problem is simply solved by creating a unified energy systems, which redistribute generated and power consumption. The problem according to some power solar power plant on time of day and weather conditions is also solved by using solar power balloons.
– To date, relatively high price of solar cells. With the development of technology and rising prices for fossil fuels, this shortcoming is overcome. In 1990-2005. prices for solar cells decreased on average by 4% a year.
– The surface of the graphic panels and mirrors must be cleaned of dust and other contaminants. In the case of large photovoltaic plants, in their area of several square kilometers, it can cause difficulties.

– The efficiency of photovoltaic cells decreases when they are heated (mostly it concerns systems with concentrators), so there is a need to install cooling systems, usually water. Also in the photoelectric converters of the third and fourth generations are used to cool the conversion of thermal radiation rays are consistent with the absorbent material in the photovoltaic element (the so-called up-conversion), which simultaneously improves the efficiency. 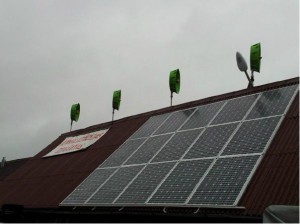 – After 30 years of operation, the efficiency of photovoltaic cells begins to decline. Spent it’s solar cells, although a small part of them, mostly for special purposes, contains a component (cadmium), which is unacceptable disposed of in landfills. Needed additional expansion of the industry at it’s disposal.