Hydroelectric power is one of the most ancient sources of energy in human history: the use of energy accumulated or running water through water wheels have been practiced in China in the III century BC. The Romans used windmills for grinding grain, which they brought from the colonies. They built the dam as well as Arabs, who by water wheels set in motion a sawmill. Later, water power was used to start and run hammers in drawing production, during grinding spices and forestry work for the transport of timber in the valley until the growing industry of the XIX century is not switched to water turbines.

For nearly 100 years of water energy is used primarily for electricity generation – today the world is only one-fifth of all electricity generated by water power. Hydropower – one more source of energy, which claims to be environmentally clean. At the beginning of 20th century large and mountain rivers of the world have attracted attention, and at the end of the century, most of them were partitioned into cascades of dams. Thanks to this energy prices have become incredibly cheap.

However, this has resulted in massive damage to agriculture and nature: land above the dam flooded, lower – falling groundwater levels, lost a huge area of land goes to the bottom of giant reservoirs. Also interrupts the natural flow of rivers, water reservoirs rot, falling fish stocks, etc. On mountain rivers, all these disadvantages were reduced to a minimum, but adds another disadvantage: in case of an earthquake capable of destroying the dam, a catastrophe could cause thousands of casualties. Therefore, modern large-scale hydropower are not really clean.

However, the disadvantages of hydropower generated the idea of a “mini hydrostations”, which may be located on small rivers or streams, their electricity will be working with small drops of water or driven only by the power flow. These mini hydrostations can be installed on major rivers with a relatively fast flowing.

Elaborated centrifugal and propeller units blown portable hydroelectric power from 0.18 to 30 kilowatts. When the maquila sector unified hydro-turbine equipment, “mini-hydrostation” capable of competing with “maximum” at a cost of kilowatt-hours. Undoubted advantage is the possibility of their installation in even the most remote corners of the country: all of the equipment can be transported on a single pack-horses, and the installation or removal takes just a few hours.

Another very promising development, have not yet been widely used, is a newly created helicoid Gorlov turbine (named after its creator). Its peculiarity lies in the fact that she does not need a strong pressure and works effectively, using the kinetic energy of water flow – the rivers, ocean currents or tides. This invention changed the usual view of hydro electrostation, which power was previously depends on the strength of water pressure, that is the height of the hydroelectric dam. 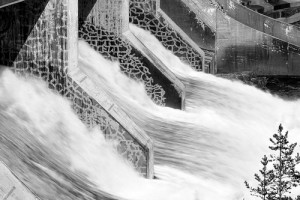 In Switzerland, hydropower covers about 56% of the country’s needs in energy. Hydroelectric power plants produce more than 1/3 of energy. 25% accounted for by small power plants that use natural water pressure to rotate the hydraulic turbine. There are also pumped storage power plant (PSPP), working on the principle of pumping water from one reservoir to another, which are located at different levels.