Windmills used for grinding grain in Persia in earlies 200 BC. Mills of this type were common in the Islamic world and in the 13th century brought to Europe by the Crusaders. In the XVI century in Europe’s cities begin to build a water pumping stations with the use of hydraulic and wind mills. Windmills that produce electricity, were invented in the 19th century in Denmark.

Blow the bills from the table

There, in 1890 year was built the first wind farm, and by 1908 year, there were already 72 stations ranging from 5 to 25 kW. The largest of them had a height of 24 m tower and four-bladed rotor diameter of 23 m. The predecessor of modern windmills with the horizontal axis was 100 kW and was built in 1931 in Yalta, Russia. It had a tower of 30 m. By 1941, unit capacity of wind power station reached 1.25 MW. In the period from 1940 to 1970 wind power is going through a period of decline due to intensive development of transmission and distribution networks for independent power supply on the weather for reasonable money.Revival of interest in wind energy began in 1980, when California began providing tax incentives for producers of electricity from wind. Most prevalent in the world got wind turbine design with three blades and the horizontal axis of rotation, although in some places still meet and bilobed. The most promising sites for energy production from wind are coastal areas. 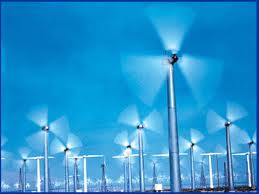 Wind generators in operation almost does not consume fossil fuels. The work of one wind turbine for 20 years with power of 1 MW will save about 29 thousand tons of coal or 92 thousand barrels of oil. In contrast to conventional thermal power plants, wind farms do not use water that can significantly reduce pressure on water resources.